Posted in Backup, Windows by Sehrish Qureshi On July 21, 2017. No comments

Do you know Oculus VR? Now many oculus software is set to install on the system drive, which is typically the C: drive. What’s worse, the Oculus Rift apps and games can’t be downloaded and saved to different drive but directly go to the drive where the Oculus software is installed. If you want to get more space, you need to take a backup of Oculus and then restore it to another drive. Also, you can directly move Oculus to another drive. How to realize the operation? AOMEI vrBackupper is designed to backup and restore Oculus Rift, its games, applications. It can also help you to move Oculus Rift installation directory to a different drive instead of the C drive to solve the low disk space issues.

How to backup & restore Oculus before uninstalling with AOMEI vrBackupper? 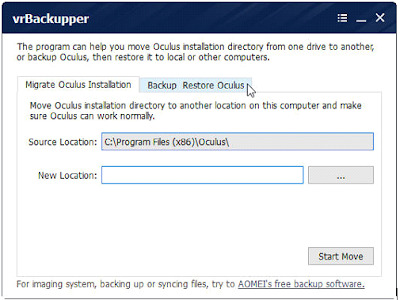 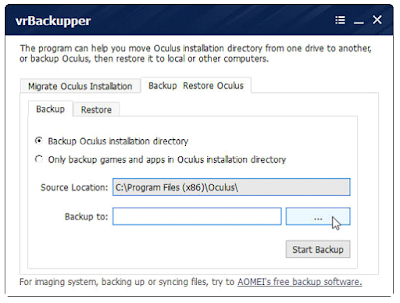 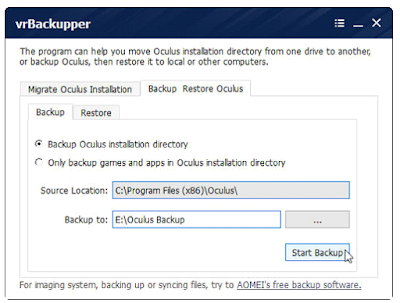 AOMEI vrBackupper alos allows you to restore Oculus to another computer, which is also the default setting. You do not have to specify the destination location one by one and all these folders will be restore to the original location in one go. 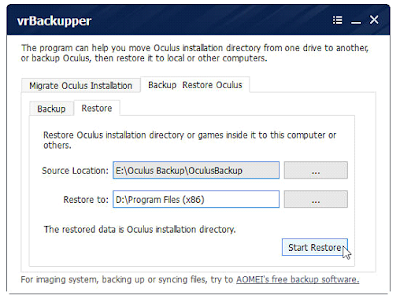 AOMEI vrBackupper is a very convenient tool to backup and restore all data in Oculus Rift installation directory. You can also move Oculus Rift installation directory to a different drive by AOMEI vrBackupper. If you want to backup and restore files/folders, system, partitions or disks, you can use their another backup tool AOMEI Backupper. AOMEI Backupper is a best free backup program, which can complete full backup, incremental backup and differential backup. Don’t hesitate to have a try!

This website uses cookies to improve your experience while you navigate through the website. Out of these cookies, the cookies that are categorized as necessary are stored on your browser as they are essential for the working of basic functionalities of the website. We also use third-party cookies that help us analyze and understand how you use this website. These cookies will be stored in your browser only with your consent. You also have the option to opt-out of these cookies. But opting out of some of these cookies may have an effect on your browsing experience.
Necessary Always Enabled
Necessary cookies are absolutely essential for the website to function properly. This category only includes cookies that ensures basic functionalities and security features of the website. These cookies do not store any personal information.
Non-necessary
Any cookies that may not be particularly necessary for the website to function and is used specifically to collect user personal data via analytics, ads, other embedded contents are termed as non-necessary cookies. It is mandatory to procure user consent prior to running these cookies on your website.
SAVE & ACCEPT